Through one of our partners, Dillon Quality Plus, the Coast Guard purchased and used our HRT-3mm Running Line Tensiometer (or line rider) to measure the cable tension loads during some qualification testing on an improved rescue hoist for the Coast Guard H-65 Dolphin Helicopter. 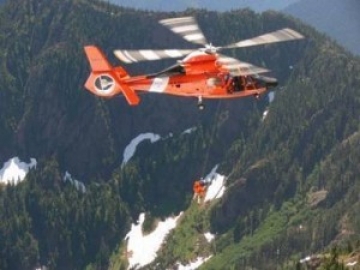 An HH-65C flight crew hoists an injured hiker to safety from a mountain peak in WA at an altitude of 6,300 feet.

The hoist was improved by adding a clutch designed to release if the cable forces exceed a known value.  The Coast Guard tested the release force pulling on the cable at various speeds from 1 in/s to 30 in/s.  After the hoist passed this testing, the Coast Guard then conducted a number of drop tests that consisted of a 600 pound mass attached to the end of the cable and various amounts of slack in the cable from 1 to 5ft. During all testing, the tensiometer (or dynamometer) was attached to the cable and the load output was recorded.  The HRT-3mm system worked perfectly. The HRT-3mm is designed to measure running line cable tension loads from 0-13,000 lbs.  It only weighs 30lbs and is compact but reliable.